Bike Commuting: Base Miles on the way to School.

Our bike techs Andrew Tritle and Parker Christensen both race mountain bikes. They also ride bikes for transportation. We asked them why. 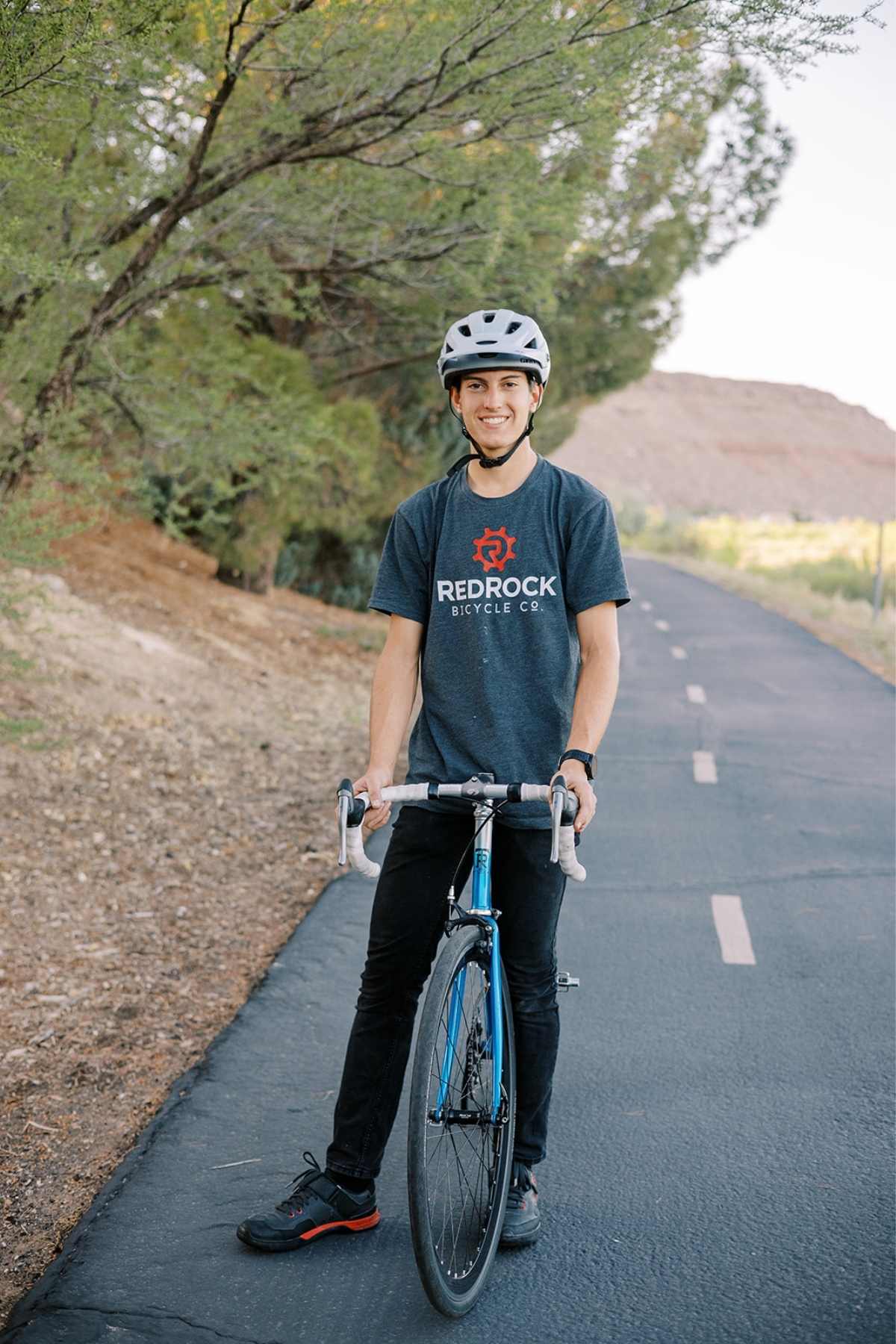 “Riding for transportation is a stress relief for me. After school for example. I take tests or something, and then I get out, and then all I have to do is cruise. If I push it, I can go fast, and get my heart pumping, or I can just chill.

After I got my license, I drove a couple of days, but then I was tired at school, and I didn’t get that morning rush. Driving didn’t wake me up. And I never bought a car. I could kind of afford one, because I never spend money, unless it’s on bikes. I want to get a truck, but I still haven’t gotten it, so I just ride everywhere.

I honestly love ripping through the parking lot by my school, I just show up and I’m hauling, it’s so funny. Folks are looking at me like ‘huh?’ While I’m having the time of my life.”

I used to work at a car wash, it was 7.5 miles from my house … oh man those were some fun rides. I would race myself some days, I would just go as fast as I could, and other days I would just chill. It was on the bike path almost the whole time, and I could just sit and be alone and think for half an hour.” 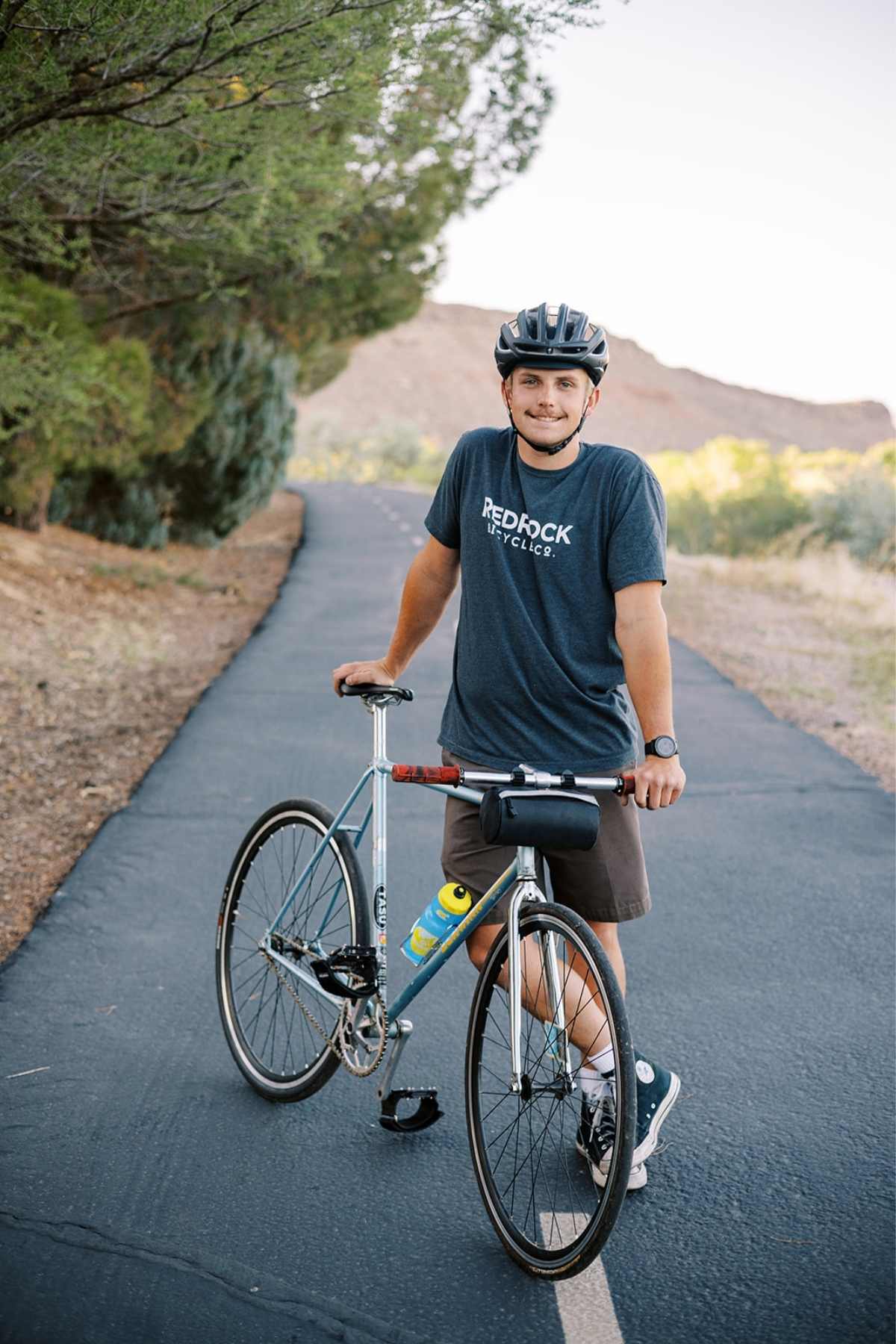 “I got into bike commuting about a year ago, because I basically couldn’t afford driving at that point. So I was like, I don’t have any money, I better ride my bike to save some money. But I love it, it’s fun. I think we had a challenge at the shop back in the summer, a commuting challenge. That kind of sparked it.

I like that you just forget about everything. When you’re riding your bike, you don’t worry about a hard day at school, a hard day at work, and you’re getting out, that’s just so nice.

There’s not a ton of people who ride to school. But it’s kind of cool. We all know we’re doing something different.

Sometimes you can’t take things with you that much. But that’s kind of part of the fun, just trying to figure out how you can take something big with you. I have my lock for example, but sometimes I don’t have anywhere to put it, so I just lock it to my belt.”

Judith: You guys both race, right? Does that go hand in hand with riding for transportation?

Andrew: For me commuting is base miles. And then if I want to do a sprint real quick, I’ll sprint somewhere real fast. I think it helps in my training. When I’m really busy, I can still get in rides, in commutes.

Parker: Yeah. It is always good to be on the bike for racing. That’s the main goal, just to be on the bike. It helps, for sure. Sometimes I throw in a sprint, just because it’s fun. It feels good.

Judith: What kind of bikes do you ride?

Parker: I got this old Schwinn, it’s a fixed gear, it’s pretty fun. I like it. There are some things I want to change, but it’s simple, it has no brakes, and you can’t break it.

Parker: Yeah, there’s no maintenance, literally none. I don’t have to worry about it, it cost me like $100, so if it gets stolen, it gets stolen. I’ll be sad, but it was cheap.

Judith: Andrew, how about yours?

Andrew: I got an old Ritchey road bike that was a single speed from a guy a few weeks ago. For less than $300, and I love this thing. It’s so fun, it’s really hard on hills, but it feels great to push it like that. It’s so cool looking too. It’s a classic bike. It’s twice as old as me, and it’s so fun when you have a bike that’s older than you are. I’m working on making it a fixie, and then it’s got eggbeater pedals on, and I’ll have either one brake or no break. I’m trying to make it really hard to steal. The pedals are going to look terrible, and you can’t coast.

Judith: Where do you guys lock up your bikes?

Andrew: I lock my bike outside. Under a tree so it’s protected. It’s my favorite tree at school. I had to trim it though. I showed up in the middle of summer with a saw, and I cut down a branch, because I hit my head on it every single time I showed up. So I sawed this thing down, and now it’s perfect. My bike fits under it perfectly. I’ve claimed this parking spot. No one can take it.

Parker: We got a bike rack at school. I don’t know, I just lock it up anywhere, wherever. 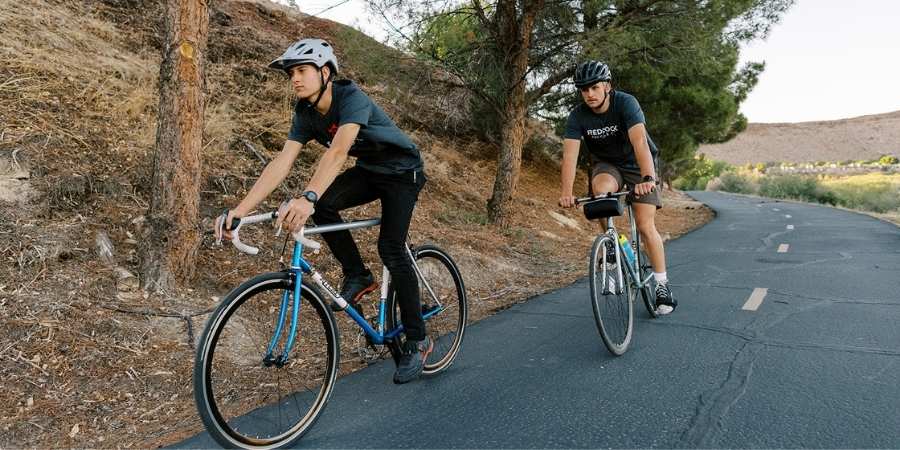 Judith: So … my perspective growing up in a biking culture, almost everyone biked for transportation. What do you both think is keeping people from doing it here?

Parker: Oh, I feel like folks are probably worried about time, but that’s totally not an issue. You think bikes are kind of slow, but not really, especially when it’s busy. It’s just as fast. That’s about it. I think if people just tried it and got the idea that we can go anywhere on our bikes, they’ll probably like it too.

Andrew: I think it takes a good commuting experience. You gotta have a fun bike, it’s gotta be a good route, and if you can go fast, people will like that. So if it’s downhill or something, you’ll love it. You’ll want to do it again. And then eventually you just become addicted to it, and then it’s just this weird psychological relief thing, and it’s fun and relaxing.

Often folks don’t have good bikes. Or they never had access to good bikes. And even if it’s simple, like Parker’s bike, no maintenance at all, but that thing is fun. A lot of people buy Walmart bikes with terrible drivetrains and brakes, and they are slow, and they just have a bad experience, and they get tired of it, and then they look at driving which relatively looks so much faster, and efficient, and fun. That’s probably why. And cars are so accessible here. You can get a car for $500, and it will work, and that’s all that matters to people.

Parker: I also think, especially with Highschool students, it’s like, what are people gonna think, I gotta wear a helmet to school. People worry about that kind of stuff in Highschool. That’s a reason.

Judith: I get that. In Germany where I grew up, we would not wear our helmets. I remember my parents would make me wear a helmet through Elementary School and then we start Middle School in fifth grade, that’s when we transition, and I was the only kid that still had to wear a helmet. I would bike down the road, around the corner, and take off my helmet and hang it on the handlebar and bike to school. So I totally get how people can worry about that. You don’t want to look funny, you don’t want to stick out, you don’t want to be that person, until you realize how much fun it is.

Andrew: Yeah, but even then, it’s the whole social popularity thing, you don’t want to stand out. I’ve always kind of stood out, I’ve never gone with the whole cliche stuff, that’s probably why, or a major part of why I always biked. I don’t really care about being like everyone else.

Judith: Is there any advice you can give folks who want to try commuting?

Parker: Get on a bike you think is cool. Don’t get on some dumb bike because you think you have to.

Andrew: Unless it is cool. Unless you’re on a dumb bike that’s cool!

Parker: If you don’t like it, don’t ride it. Or make it so you want to ride it.